Two people have written to me this week about pricing on pro-packs. I figured that if two people actually bothered to email me, then it’s probably worth writing about here!

First of all, for those who don’t know, a pro-pack is just the name for a 5-pack of film that comes in a cardboard box. Kodak and Fuji (and maybe others I can’t think of) sell some of their film this way, and it looks like this:

Not every film manufacturer sells pro-packs. Ilford, for instance, sell film in “bricks“, which consists of 10 rolls of film held together by thin, transparent plastic. Bricks don’t look as cool as pro-packs, but they’re efficient, and many brands use them. Here’s a picture of a brick of JCH Street Pan: 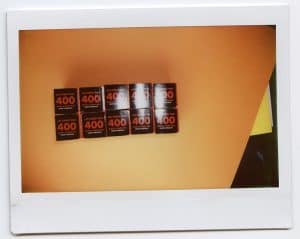 A brick of JCH Street Pan 400 – sorry for the small size, this was the only photo I had handy.

I don’t have many pro-packs listed on the store, but I do carry  them. I should probably add them specifically, but how it works right now is that if you order 5 individual rolls of a film that comes in a pro-pack, I will just send you a pro-pack.

Someone asked me whether there’s a price break for pro-packs, and unfortunately, the answer is no. There’s no real price break as to whether film sellers like me buy single rolls or pro-packs from the manufacturer, and that’s why if you check any online store, the price of a pro-pack is almost always the same as 5 individual rolls.

There is one exception to this – I’ve seen places online that do have a discount for a pro-pack, but what’s really happening is that they’re just kind of charging a bit more markup for a single roll – this isn’t common though, and mostly happens with big camera store chains that only kind of carry a couple of types of film begrudgingly.

Now the quirky bit about pro-packs relates to which films are sold this way. This has always confused me, especially when it comes to Kodak, which have a sort of confusing setup for this. Here’s the basic rundown:

I still haven’t quite figured out the reasoning behind what Kodak chooses to package as a pro-pack vs. an individual roll, but I imagine that it’s probably based on whether people are more likely to buy a single roll vs. an entire pack. For instance, Portra 800 is a premium film and costs more than Portra 400, so it makes sense people might buy it in smaller quantities. Although I’m not sure if this really extends to Ektar, since in my experience from running this store, people tend to buy multiple rolls of Ektar, I guess because it’s relatively cheap for such a nice, high quality film.

I guess I’ll never really know why it’s done this way. Or maybe someone will probably comment on this post with an extremely obvious, logical answer within 10 minutes of me posting this, and then I’ll know haha.